Cheers to the Champagne of Monroe! 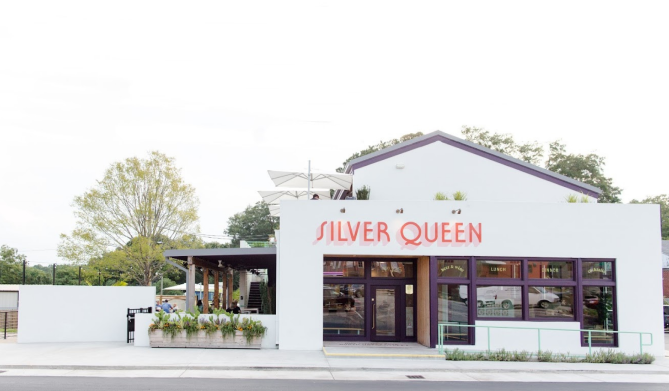 Silver Queen is the dream of two friends, Wes Kent and Andrew Williams, who were raised in Monroe. Andrew and Wes were brought up to have a strong work ethic, creative curiosity, and to truly love their neighbors. Their dreams of restaurant ownership started to take shape in 2016 as they launched the Silver Queen food truck.

Silver Queen was derived from the stories of Chili Queens and the history of tacos, first served outside of silver mines. lighthearted conversation in the plazas of San Antonio, Texas. The Queens were known for being jolly and bright women who decorated their makeshift booths with bright ribbons and flowers. They offered food, lighthearted conversation, and a warm culture in the plazas of San Antonio, Texas. The name “taco” originally referenced the wrapping for the dynamite used in the silver mines. The miners started calling their lunches tacos, too, because they would wrap tortillas around leftovers and the shape resembled the dynamite sticks. The combination of the hospitable Queens and the location of the origin of the “taco” were merged to form Silver Queen.

Chef Wes is a graduate of Johnson & Wales University’s Culinary program. Through school, Kent landed an internship at a few of Georgia’s favorite restaurants including Hugh Acheson’s 5&10, The National under Chef Peter Dale, and Empire State South with Chef Josh Hopkins. Kent then took his first head chef position in Thomasville, helming the kitchen for Sweet Grass Dairy and then Liam’s restaurant. He leads the Silver Queen kitchen crafting fabulous seasonal offerings and encouraging his team to create alongside him.